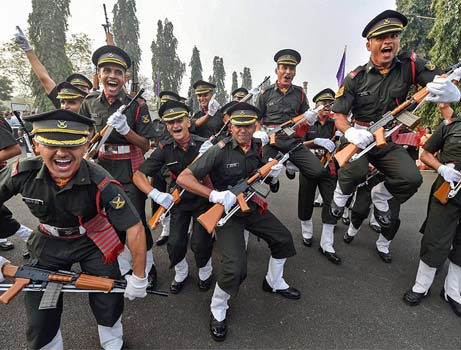 CDS is conducted twice a year at the national level by the Union Public Service Commission to select its officers for the above-mentioned courses. After CDS exam, students who qualify for this written exam get a call letter for an SSB interview. The successful students after SSB undergo medical test and then the final merit list is made on the basis of their written, interview and medical test. For Flying Branch, there is another test PABT which is part of SSB. PABT stands for Pilot Aptitude Battery Test.

Women candidates are eligible to join the Officers Training Academy (OTA) as Short Service Commission (SSC). It is one of the entries in defence for Women candidates.

Also, there are seats reserved for candidates having NCC ‘C’ Certificate.

Once the Candidate is recommended for commission then he/she is given appropriate training in the respective academies. Post completion of the training the cadets are entitled and join the services as Sub Lieutenant

What is the Eligibility of appearing for CDS?

What is NCC Special Entry Eligibility?

NCC Air Wing Senior Division ‘C’ certificate acquired on or after June is mandatory. Candidates should have mandatorily passed with a minimum of 60% marks each in Maths and Physics at 10+2.

What is the Process of Examination / Selection?

The CDS entry involves the Written Exam, SSB, Medical and then the final merit list is made for the recommended candidates.

Phase 1. Written Exam is a common entrance exam for all candidates opting for a different branch, which comprises of 300 Questions of 1 Marks each. A negative marking of 0.33 mark is also there for every wrong answer.

For candidates appearing for the OTA exam, the total questions are 200 of 1 Marks each. A negative marking of 0.33 mark is also there for every wrong answer.

Phase 2. The qualified candidates of the written exam are then called for the SSB process at the Service Selection Board Centers. SSB is an extensive 5-day process that comprises of Screening Test, GTO, Individual Test, and Interview.

Phase 3. Those candidates who qualify for the SSB process are then called for Medical Examination by Service Selection Board.

Phase 4. The Final Merit is prepared on the basis of the Written Exam, SSB Interview and Medical Test.

What is Application Fees for the CDS Exam?

When is the CDS Form available and other important dates?

What is Tentative Vacancies in CDS Entry?

What is the Mode of Written Exam?

CDS Exam is held in ONLINE mode at the authorized Examination Centers available in 40 Cities across India. We will help you to succeed in CDS -2021 exams with best CDS coaching environment in Dehradun with full SSB ground.

What is the Pattern of CDS Exam?

The written Exam format for admission to IMA, INA, AFA is as below:

The written Exam format for admission to OTA is as below:

What is the Syllabus for CDS?

What is the Type of Commission?

Permanent Commission (PC) – This commission is only for Men and only for Ground Duty Branch. In this type of commission, the Officer will serve the Indian Air Force till the age of superannuation as per branch and rank.

Short Service Commission (SSC) – This commission is for both Men and Women. The engagement period for Flying Branch SSC Officer is 14 Years from the date of Commission (which is non-extendable).

The Engagement period for Ground Duty Branch is 10 Years from the date of commencement. An extension of 4 Years may be granted subject to willingness, suitability, service requirement and availability of vacancies.

What is the Process of SSB for CDS?

Day 1: This is the screening day in SSB and you are generally asked to report early morning by 6:45 AM – 7 AM at the railway station. You will board in an SSB bus to reach the selection center.

First, you will be welcomed at the SSB by a senior officer and briefed about the rules and regulations, later you will be asked to fill in some forms followed by a quick breakfast but we suggest to have your breakfast prior to that because the testing will be a long process.

Once the paper formalities are done, you will be facing the first test of the SSB interview and that is Officer Intelligence Rating Test (OIR).

After which Picture Perception and Description Test (PPDT) is conducted.

Based on the strength, the results are announced by afternoon and the selected candidates go to the testing room again for the document verification. The remaining candidates are dropped back to the railway station. The document checks followed for the selected candidates immediately and if you have an issue with documents and you are not eligible for the entry, you will be sent back too or asked to report later in a different batch with complete documents.

Once the document verification is done, all the successful candidates will be facing a long psychological test till night.

Day 2, 3 and 4: Your interview and GTO tests might fall on any of these days. Generally, you get one free day in SSB. Some of you might have your GTO/Interview on the last day also. Some may have GTO/Interview on the same day but the timings won’t clash for the two. You might go directly from GTO for the interview. You are required to carry the folder and all certificates, academics and extra-curricular to the interview, make sure whatever you claim in your PIQ form, you must have proper certificates to verify that, you cannot simply say that you left the certificates at home. The interview is generally a 30 minutes-60 minutes procedure. You’ll be informed well in advance through a notice placed on the notice board about the schedule of your tests.

Day 5: This is the conference day. Some may have their interview/GTO scheduled before the conference also. A conference is a place where you get to see all the board members in the uniform. Your result is discussed there. You are called in the conference hall and the process is of hardly a minute, it may stretch for borderline cases. After the conference your results are announced, it’s lunchtime by now. Those who make through are asked to stay back for the remaining formalities and others are taken back to the railway's station.

Like PABT test, the candidate will get only one chance to clear the CPSS test, if failed, would never be eligible for flying in the armed forces, be it Air force, army, navy or coast guard. Aspirants will get only one chance to take the test under the Computerized Pilot Selection System. CPSS places special emphasis on psychomotor skills and cognitive abilities of aspirants. It ensures objectivity in results. The system will be used to screen pilots for IAF, Army, Navy and the Coast Guard.

The CPSS test is simple. Elaborate instructions are given before commencement of both these test so there will be no confusion. So dont worry, you should focus more on the SSB part as that is the main challenge.

Medical: In SSB the medical may not take place immediately after the selection. You will be given a date for the medical.

What is the Training Period after Final recommendation?

Indian Military Academy: Candidates finally selected will undergo a course of training for about 18 months. Candidates will be enrolled under the Army Act as Gentlemen cadets.

Indian Naval Academy: Meritorious candidates who are medically fit are appointed to the 45 vacancies in the order of merit. Six of these 45 vacancies are reserved for Naval NCC "C' Certificate holding candidates under the NCC Special Entry Scheme. The cadets shall be commissioned in the rank of Sub-Lieutenant after successful completion of approximately 18 months of training.

The candidates shall remain under probation till completion of initial training which is as follows:-

Indian Airforce Academy: Candidates finally selected will undergo a course of training for about 74 weeks.

Officers Training Academy: Selected candidates will be enrolled as Gentleman/Lady Cadets and will undergo a course of training at the Officers’ Academy for an approximate period of 49 Weeks. On successful completion of training Gentleman/Lady Cadets are granted Short Service Commission in the rank of Lt. From the date of successful completion of training. The University of Madras will award "Post Graduate Diploma in Defence Management and Strategic Studies" to all cadets who successfully complete Pre-commissioning training at Officers Training Academy, Chennai.

What is the Pay scale of CDS Officers?

Stipend to Gentlemen Cadets during the entire duration of training in Service Academies i.e. during the training period at IMA is INR 56100/- per month

What is Doon IDA Fees Structure and Programme Duration?

# Above Fees is inclusive of GST

^ All students will get a Bag, Dress Set, and T-shirt/accessories

$$ Fee Concession of 50% for Wards of Martyrs of Armed Forces.

$$$ Fee Concession of 10% for Female Candidates

Do you have any other Question related to CDS? (Please write below, our team will reply within 24 hours)

The duration of the Course term is 4 or 6 months, depends on the candidate understanding level. We at Doon IDA strive hard to deliver the best all round development of the candidate. Primarily we focus on the Written Exam preparation but also regularly include personality development sessions.

The Entire Days Schedule for the aspirants is as below:

For OTA candidates, the Classes will start from 11:00am onwards

DAILY TIMINGS: Classes are held from Monday to Saturday from 10 AM to 6 PM (with breaks for Lunch).

The last Sunday in the month is reserved for an Adventure Trip / Educational Trip / Defence Academy Trip, which would be communicated to the students 2 weeks prior to the Schedule. 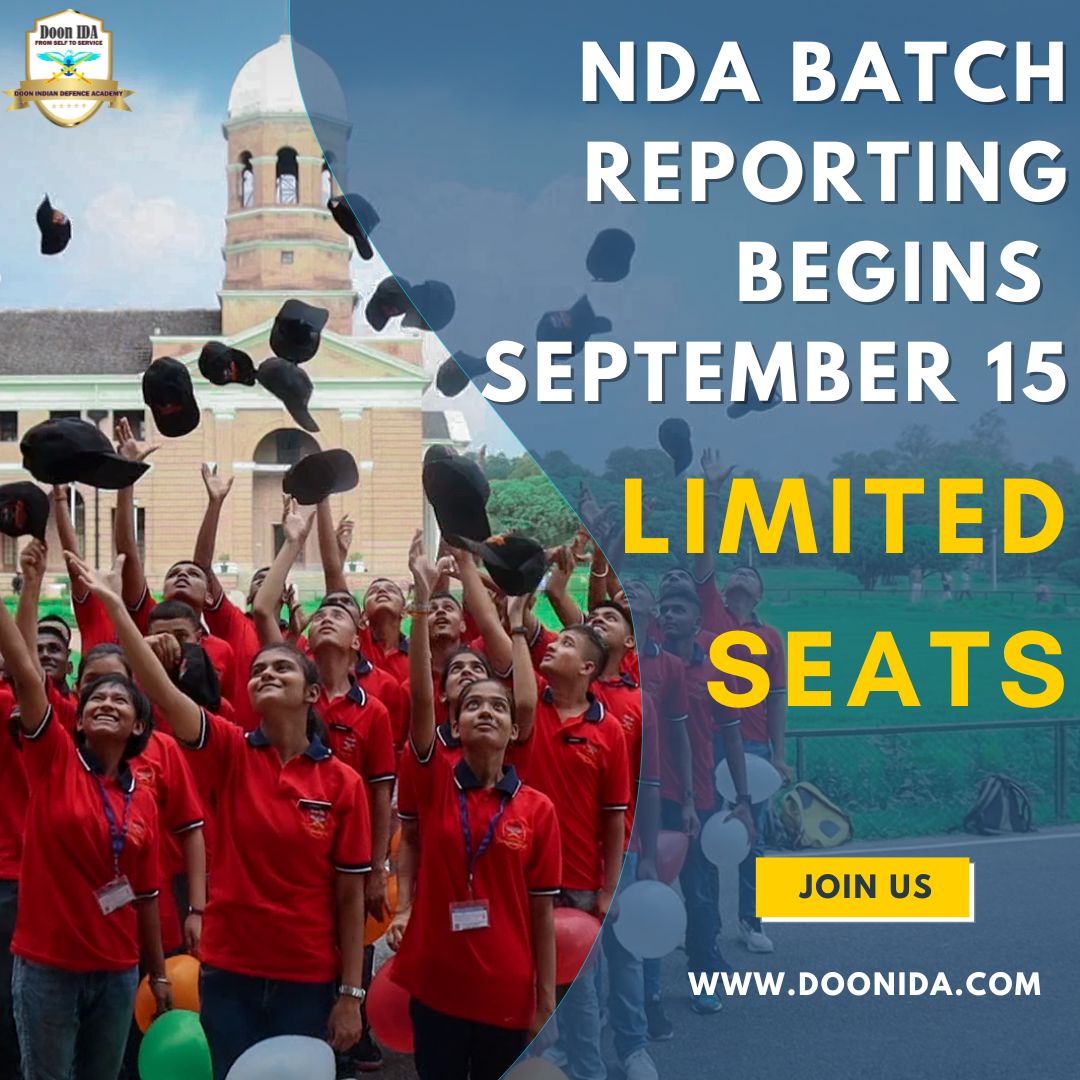